Screening: All is Fair in Dreams and War

Screening: All is Fair in Dreams and War

On May 19, in collaboration with Gladstone Gallery and Sprüth Magers, Propaganda organized a first ever Georgian screening of Andro Wekua’s “All is fair in Dreams and War,” A five minute video was looped for one day only in a blue screening hall of former Cinema house of Tbilisi, Georgia. With artist’s decision, the screening of the film was officially announced somewhat spontaneously – two days before screening, while graphic works of same title were spread around the city as anonymous and dateless posters.

The screening was presented by the text of Daniel Bauman, a curator at Kunsthalle Zürich:

“Andro Wekua’s work strides powerfully and forcefully in our direction – while constantly eluding us. As visitors we find ourselves caught between contradictory movements, and the result is a tension that we cannot easily escape. This accounts for some of the intensity and quality of Wekua’s work, but not all. Much of it has to do with the artist’s way of weaving images together and playing them against one another, and the undertow this creates. The draw of this maelstrom is narrative and cinematic in nature, although his films in particular tend toward abstraction.

Take Wekua’s latest film All Is Fair in Dreams and War (2018). Running just over five minutes, the film unfolds before our eyes in the form of a central composition (or rather a Rorschach test). It is arranged around a central axis, a burning palm tree, which appears in the middle between 1 minute 54 and 3 minutes 14. It is a single (and the longest) uncut take, around which a series of shorter “before” and “after” sequences appear on the “left” and “right,” respectively. “Before” (or left), we see a moon, sky, seagulls, palm trees, cars, city, dance, nature, water. “After” (or right) shows a city, gambling, movement, water, sky, night, time, city, darkness. This triptych is held together and varied with a metallic soundscape by Berlin musician Jörg Hiller. 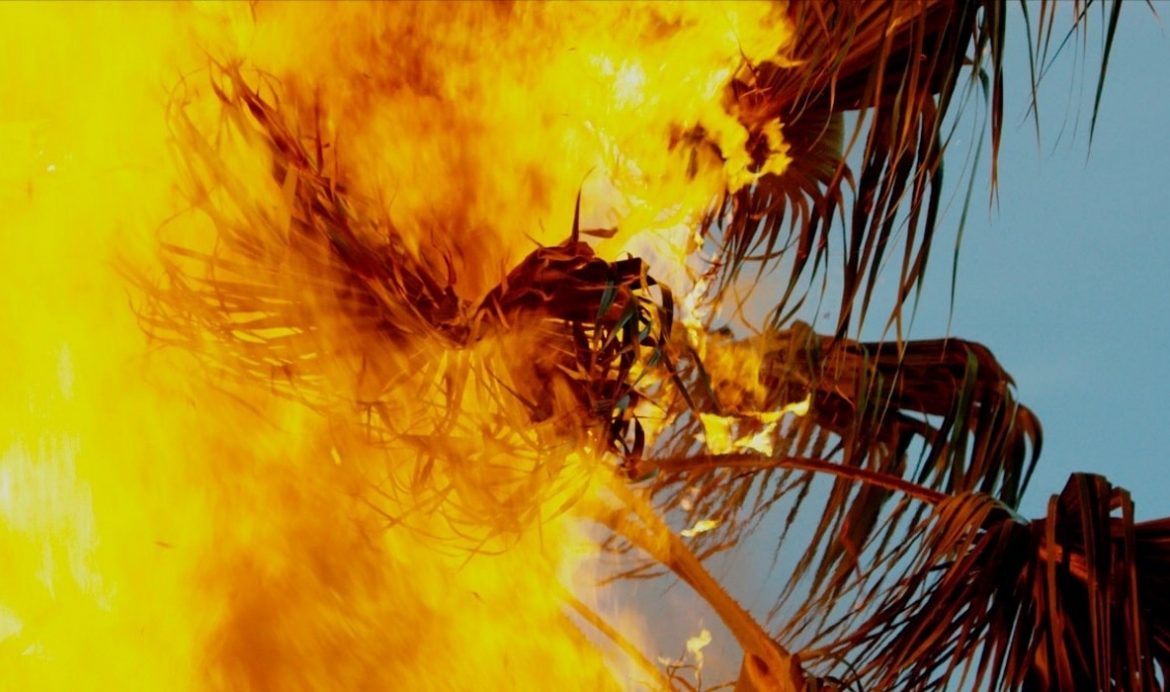